Given the current lockout of both the users and employees of Saskatoon Transit there has been increasing talk regarding the low level of public transit usage in Saskatoon. 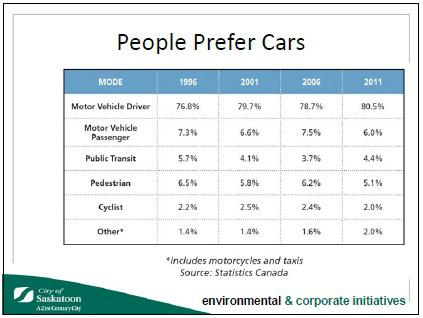 The numbers for 2011 match the National Household Survey (NHS) numbers from Statistics Canada. Phil (like many others) seem to make the false assumption that these numbers include “all trips taken in the city, from commutes to Sunday drives.”

This is false. The only question asked on the NHS is how one gets to work, and you may only choose one method. It doesn’t provide a reasonable reflection of people who use different types of transportation depending on the time of year, or even during a single day. Therefore these numbers don’t include people like myself. I commute by bike for a little less than half the year and transit for a little less than half, with the remainder by automobile when I need my car for work purposes. How does someone like myself answer the NHS question? Does the answer fairly represent my usage of each mode?

The NHS question doesn’t account for elementary, high school, post-secondary students, the unemployed, retired, and many others.

In addition these numbers are for the whole Saskatoon Census Metropolitan Area (CMA), which includes Warman, Martensville, Dalmany, Clavet, Colonsay, Dundurn, Whitecap First Nation, and other towns along with the area surrounding the city in the RM’s adjacent to Saskatoon.

The City of Saskatoon did a travel survey in 2013 and the percentage for transit was similar. But this survey counted trips. So 4% of all trips in the CMA are via public transit. Not 4% of the population of Saskatoon., but 4% of all trips.  It also confirmed that for trips just commuting to work was about 4%, as the NHS indicates.

There is something that makes me uncomfortable about these numbers. They don’t seem to truly reflect the current transit usage when they fail to include many of those who use transit, and include people who not only are not transit users, but are not even potential transit users. There are probably not a lot of people commuting between Saskatoon and Martensville via bicycle or as a pedestrian either.

The NHS says there is just shy of 130,000 people in Saskatoon (city only) over the age of 15 and employed. 6000 of those use public transit as their main means of commuting. But again, this is only people commuting to work and using transit as their primary means. It excludes people who are not working, or who are working but use a different mode as their main commuting method.

I don’t really know how to fairly evaluate how many people depend on transit (or even choose it). Anyone who uses it, even on an intermittent basis knows there is more than 6000 people using it. We could start by excluding people outside the city limits. Then that 4.4% goes up to just over 5% (statscan NHS). Then we need to include students (elementary, secondary, and post secondary), people who don’t work, and people who use transit, but not as their primary mode.

What is clear is that we can do better. The people who use transit because they have no other option are not going anywhere. Saskatoon Transit has that market share locked up. What it can, and must do is attract more users from elsewhere. And that is primarily attracting people who have transportation options. I have options. I choose to use transit in the winter. A bus pass is far less expensive than parking downtown, and that’s before paying for gas. Time wise cycling is quickest for me, but I’m not a winter cyclist. Driving would not save me more than a few minutes over the bus, and not enough to justify the higher cost.

Saskatoon Transit is not going to attract people from their cars unless it is a cost and time effective option. How to deliver that option to more people is the hard part. Maybe we can start by recognizing that having mediocre transit (or none at all) has a significant impact, and then refraining from using those numbers above as justification for under funding public transit in Saskatoon.

Our YXE
the other hilary

A Positive Voice for Our City

Catalyzing Transit Change in Saskatoon since 2014

Does that add up?
Saskboy's Abandoned Stuff

Politics, Humour, and Things at AbandonedStuff.com

A blog about taxes, expenditures, and all things in between. Neither pro- nor anti-tax.

A weblog about urbanism, technology, & culture.